In observance of the principle of the intensity and combining of uses, the inter-neighborhood route is a light infrastructure composed of a pedestrian path, cycling and sports paths and a reserved lane system accessible to non-polluting public transportation and delivery vehicles.

This new route, adapted to the recreational, sports and travel needs of people and goods, creates a network of the universal halls, the new central points of the neighborhood. It makes it possible to go from one end of the city center to another in less than 15 minutes.

Modular and autonomous electric vehicles called “modulos”, go along the inter-neighborhood route and, depending on the configuration chosen, take people, merchandise or wastes through the city.

The self-guidance of the vehicles on the inter-neighborhood route is provided by sensors positioned on the various "modulos", thereby limiting the road space that they occupy.

This new system reduces the number of vehicles in the city while optimizing their use according to the times of the day. 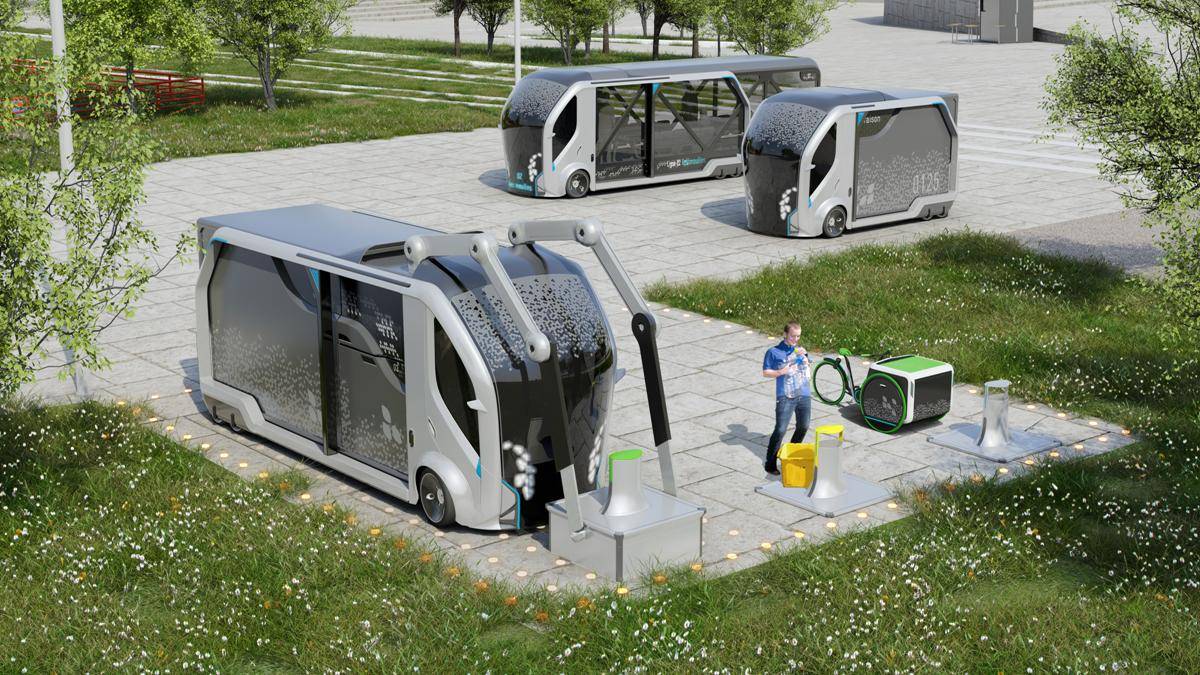 The urban Unibridge® supplement the range of environmentally-friendly mobilities by increasing the number of road crossing structures reserved for pedestrians and cyclists.

These metallic-structure bridges, based on the know-how of EIFFAGE Construction Métallique and the Matière Company, are built from casings prefabricated in factories and assembled on site in less than 72 hours.

Their adjustable covering provides shade in the daytime and bears photovoltaic cells that cover the night time energy needs for marking with LEDs. This variable intensity lighting, with dynamic management for an objective of "rational public lighting", helps reduce the structure’s energy consumption and improves its autonomy. The integration of urban furniture made of regional wood and the vegetation of the parapets ensures the integration of the urban Unibridge® in its environment.

The surfacing product containing the BIOPHALT® vegetable binder, developed by EIFFAGE Travaux Publics, is composed of pine resin applied at low temperature which lightens the carbon footprint of the structures. 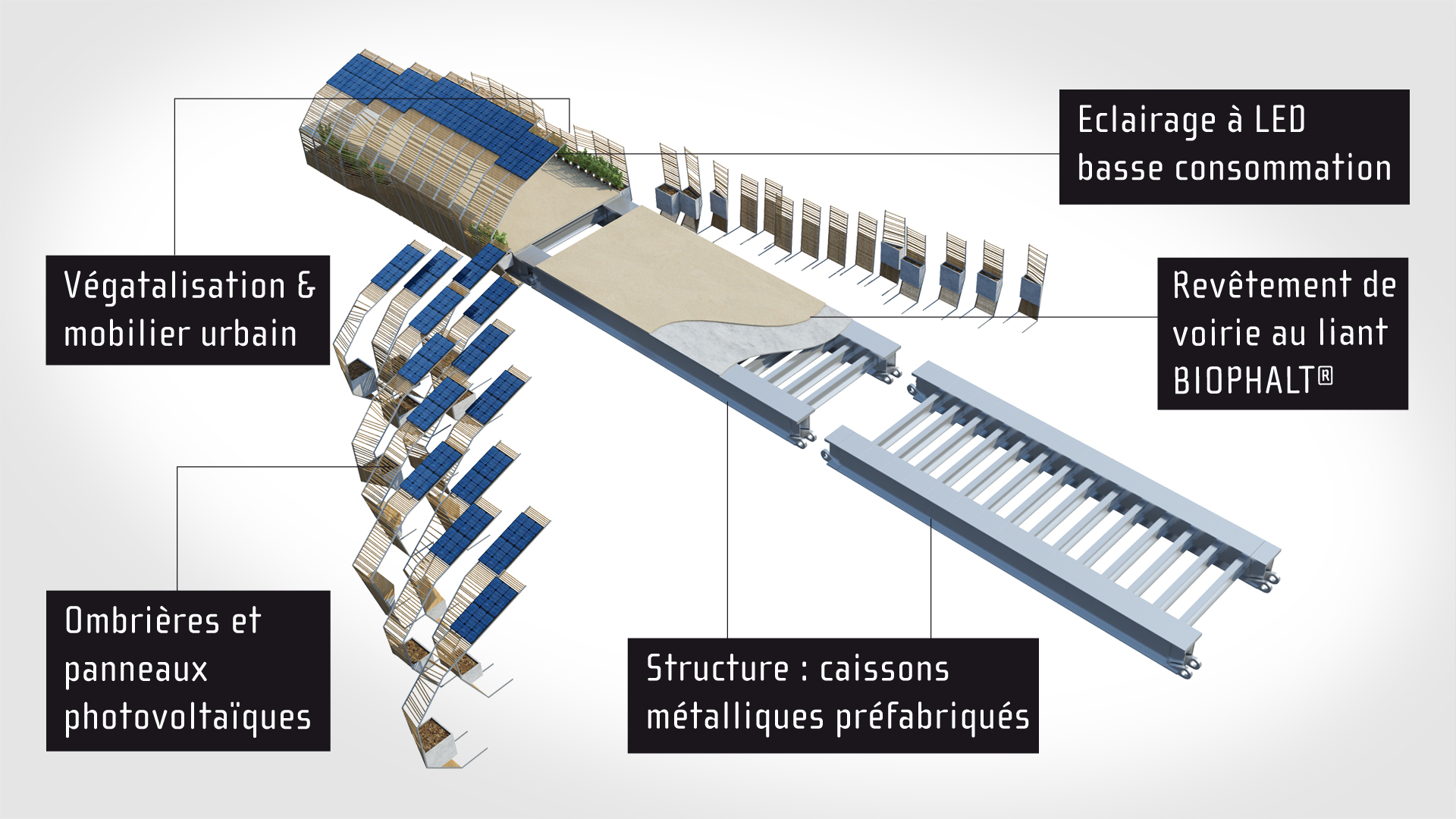 The modularity and the rapidity of the assembly and dismantling operations for the Unibridge® make it possible to efficiently integrate them within the urban fabric, both to allow pedestrians and bicycles to cross a natural or artificial obstacle and to absorb the flows generated by a temporary event. 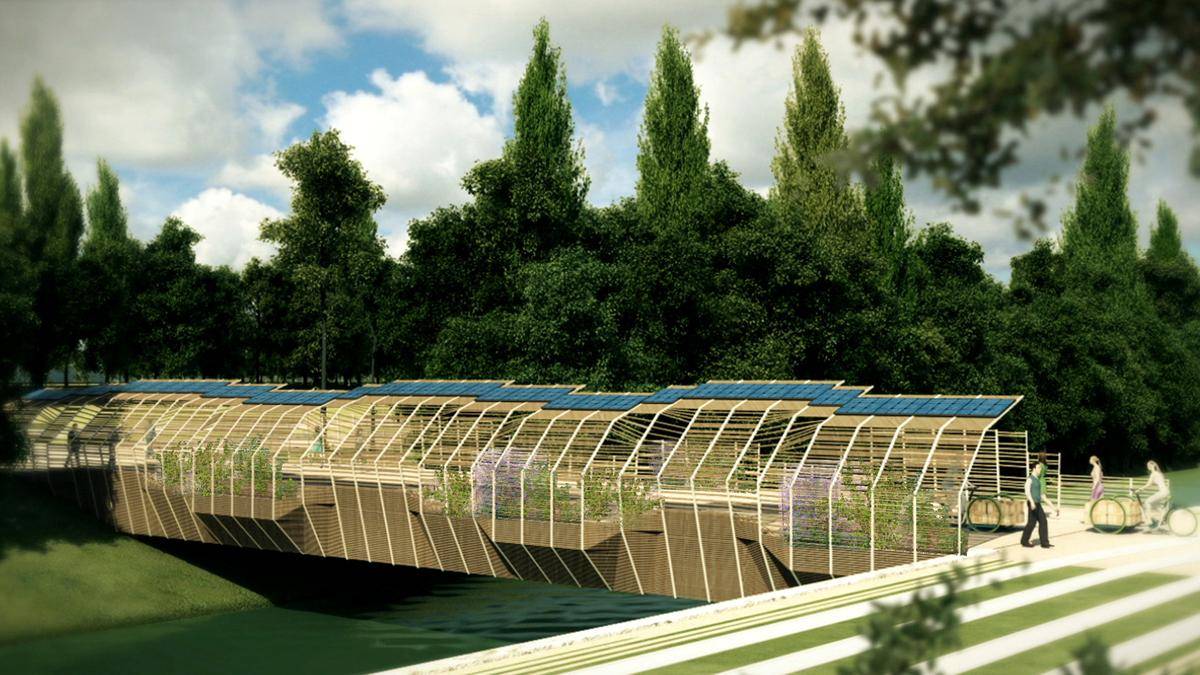